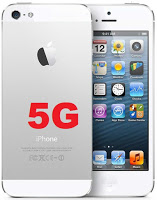 Accoding to Business Insider, Apple is allegedly testing the
next level of wireless technology. The American tech giant has applied for an
experimental license for a new wireless technology named the millimeter wave. The
FCC made this public after approving it on Tuesday. This technology is called as
5G network. In summary, Apple is working on the Fifth Generation (5G)
technology.
Apple has laid the foundation needed for testing 5G network
in California. It has set up workshops in two facilities: one is near its 1
Infinite Loop headquarters while the second is at Milpitas, California. Apple
will experiment millimeter wave 5G wireless technology in both locations.
In their records, Apple stated that this experiment will take
a year or even less. Though, it’s obvious that 5G network infrastructure is not
yet available. But then, it could be available before Apple round off the
testing, so it’s possible that the subsequent iPhone or any other cellular
device from Apple might be 5G network compliant.
Below is a quote from the report:

“Apple Inc. seeks to assess cellular link performance in direct path
and multipath environments between base station transmitters and receivers
using this spectrum. These assessments will provide engineering data relevant
to the operation of devices on wireless carriers’ future 5G networks”.

It is decent to see that the tech giant is already thinking
of the future.
Related Posts

Meanwhile, some networks providers have commenced work on 5G
technology. For instance, T-Mobile and Sprint has announced their plans on the
technology, while AT&T and Verizon Wireless have been in the testing stage
5G for a sometimes now.
Consistency in devices accessing bandwidth is one of the major
factors to look out for in 5G technology compare to what we have now with the
cellular networks.
According to the submission, one of the bands Apple proposes
to test is the 28GHz frequency, which is allotted for earth-to-space
transmissions.
Some reports alleged that Apple has formed a hardware team
of persons with knowledge in spacecraft and satellite design. This simply means
Apple is not leaving any stone unturned.
VIA
Share