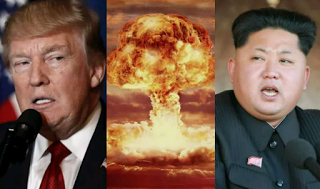 My honest question is; Is the World War 3 going to touch Africa if it happens at all?

Read below an extract from a foreign media:
Speculations of World War III have been going on for a long time. While the effects of the previous two World Wars still prevail, people cannot stop talking about the possibility of a third world war.

Amid this tension, self-proclaimed ‘Messenger of God’, Clairvoyant Horacio Villegas has predicted that the third world war will begin on March 13, 2017. The mystic who predicted Donald Trump‘s victory in the US presidential elections claims that World War III will be nuclear.

His vision predicts that on the 100th anniversary of the visitation of Our Lady of Fatima, May 13, 2017, World War III will begin. This prediction has left various believers in a state of distress.

Horacio Villegas has made various predictions to date revolving around the United States President Donald Trump and had prophesied that Trump would attack Syria. Villegas prediction does not end there.

The clairvoyant who had the vision in a dream revealed that he saw ‘balls of fire falling from the sky and hitting the Earth.’ Villegas claimed that President Trump will be named as the ‘Illuminati King’ and will begin the third world war.

The tension between the US and North Korea are extremely high as the countries as pitting against each other. The recent attack on Syria which was planned and executed caused a lot of distress between North Korea, China and Russia. North Korea had already warned the US to stay away from them when they tried to pressure around the Nuclear weapons in North Korea. North Korean leader Kim Jong Un recently warned that they have a super-mighty pre-emptive strike planned.

Horacio Villegas’ vision, therefore, causes a lot of tension as people contemplate the possibility of another world war, and this time a nuclear one. The exact date being predicted by the self-proclaimed seer marks the 100th anniversary of the Visitation of Virgin Mary.

According to beliefs, the Virgin Mary has visited Fatima in Portugal on six different occasions, and the last visit was marked on May 13, 1917. Our Lady had announced the end of World War during this visit and asked the soldiers to return home soon.

The clairvoyant has made various other prophecies and has claimed to have visions in the past as well. Horacio Villegas claimed that he was kept single by the almighty above with no children so that he can focus on delivering God’s messages to his people.

According to him, “The main message that people need to know in order be prepared is that between May 13th and October 13, 2017, this war will occur and be over with much devastation, shock and death!”