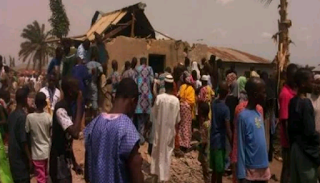 A middle aged man has been arrested and detained by the Nigerian Police in Ilorin for allegedly caught with human parts. He was alleged to have been a dealer in such product.
Before encountering his waterloo, the suspect’s Toyota car reportedly broke down and was looking at his engine for solution when the residents of started perceiving some terrible odour around them.
The suspect’s ordeal was exposed after his vehicle broke down in Adewole Estate, in the Kwara State capital, Ilorin, yesterday afternoon, April 23, 2017.
While looking at his car engine for solution, passers-by and residents perceived an offensive odour which led to search operation. Upon searching his vehicle, human parts such as a skull, two arms and two legs were discovered in the trunk, all wrapped in a black nylon bag.
All thanks to the Policemen from Adewole Police Station, who rushed to the scene upon getting the information on the discovery, the suspect was lynched by the large mob and may have even been murdered.
Related Posts

The suspect was then taken to the Adewole Police station in Ilorin accosted by residents who were screaming and raining abuses on him.
Upon reaching the suspect’s residence at Ita Kudimo, Abata Suban, Pakata, Ilorin West Local Government Area, thorough search was conducted, only to discover another sets of human parts in his again.
The building was demolished and hoodlums allegedly used the opportunity to move away some of his properties.
Mr. Olusola Amore, who is the Kwara State Commissioner of Police confirmed the occurence of the incident.
Speaking to Vanguard, he said: “It is true that a man was caught with human parts today (yesterday).

“He was beaten at Kudimoh area of Adewole. We arrested him so that we can find other people connected with that business of human parts.

“The case is now at Adewole, but the State CID will take over.”
CrimeNewspolice
Share