By Andre Falana On Apr 30, 2017
Share
Join Us On Telegram
The President of the United States of America, Donald Trump will be the first president in 36 years to disregard  and absent himself from the annual White House Correspondents dinner.

The last time such happened was 1981, and the then president missed the dinner because he was just recovering a gunshot wound. Ronald Reagan missed the occassion in 1981 but never ignored the gathering, he called into the event through video feed to join them.
Related Posts

Donald Trump relationship with the media has continued to go sore and seems there is no ending at sight, since the president is not even ready to accomodate them.
Trump chose to attend a rally in Pennsylvania to mark his first 100 days in power rather than attending the dinner.
He also communicated his frustration with the media via his twitter handle; 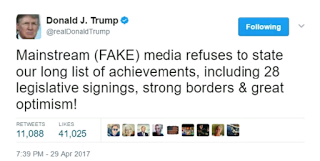 Video: “I am not corrupt and I don’t like money” – Rotimi Amaechi