By Andre Falana On Apr 30, 2017
Share
Join Us On Telegram
Related Posts 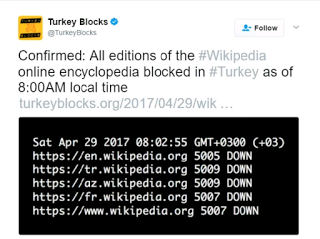 On Saturday April 29, 2017, the Turkish government confirmed that its blocking of access to a popular online encyclopedia, Wikipedia after connecting the country to terrorism.

According to Anadolu Agency, which is run by the state, articles and comments on the popular online encyclopedia suggested that Turkey is ‘in coordination and aligned’ with extremist groups.
Turkish Ministry of Transport, Maritime Affairs and Communication, stated that;

“It has become part of an information source which is running a smear campaign against Turkey in the international arena.”

Turkey had ealier warned Wikipedia to eliminate the content, but the nonprofit encyclopedia objected.
The statement also stated that once Wikipedia meets Turkey’s demands, the access ban will be lifted.
Foreign NewsTurkeyWikipedia
Share

New Android Phones In Turkey Will Not Have Google Apps

New Android Phones In Turkey Will Not Have Google Apps