By Andre Falana On Apr 10, 2017
Share
Join Us On Telegram
Russian and Iranian militaries have cautioned the United States
President, Donald Trump that they would hit back with military action if he
launched more attacks against Bashir al-Assad in Syria again. 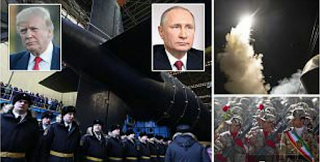 This caution is as result of the airstrikes against Syria forces
on Friday, April 7, 2017 in reprisal to the chemical attacks by Assad on his
own people.
In an ominous threat, they said the US President had crossed
a ‘red line’ with his surprise missile bombardment on Bashar al-Assad’s forces.
‘From now on we will respond with force to any breach of red lines and America
knows our ability to respond well,’ the military chiefs said in a joint
statement with militant group Hezbollah.
The Russian Embassy in London suggested on Sunday night
there could be ‘real war’ if Moscow is presented with an ultimatum over Syria.
But UK Foreign Secretary Boris Johnson has said he intends to lead a push on
Monday for Russia to face tough new sanctions unless it withdraws its support
for Assad.
Officials in the Trump administration on Sunday demanded
Russia stop supporting the Syrian government or face a further deterioration in
its relations with the United States.
Related Posts

US Secretary of State Rex Tillerson will visit Moscow later
this week for scheduled talks with Russia.
US officials said Russia, in propping up Syrian President
Bashar al-Assad, bears at least partial responsibility for Wednesday’s poison
gas attack on villagers in Idlib province.

“I hope Russia is
thinking carefully about its continued alliance with Bashar al-Assad, because
every time one of these horrific attacks occurs, it draws Russia closer into
some level of responsibility,” Tillerson said on ABC’s last week.
Although officials acknowledged that they have seen no
evidence directly linking Russia to the attacks, the top national security
adviser, Army Lt. Gen. H.R. McMaster, said Russia should be pressed to answer
what it knew ahead of the chemical attack since it has placed warplanes and air
defense systems with associated troops in Syria since 2015.

“I think what we
should do is ask Russia, how could it be, if you have advisers at that
airfield, that you didn’t know that the Syrian air force was preparing and
executing a mass murder attack with chemical weapons,” McMaster said on Fox
News.
Despite the looming threat of war following the decision to
launch airstrikes, Trump made his way on to his golf course in West Palm Beach,
Florida on Sunday to relax. This will be his 16th visit to one of his own
courses since he became president on January 20, 2017.
Source: Daily Mail
attackBombdonald trumpForeign NewsIranNewsRussiaSyria
Share

Saraki opens up on Senate vs Presidency crisis, Ali Ndume’s suspension and his CCT Trial