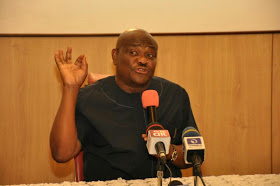 The Rivers State Governor, Nyesom Wike, came to say the $43 million allegedly found by EFCC belongs to his state and had has given the Federal Government 7 days ultimatum of to return the money which was found in an apartment in Ikoyi, Lagos State.

“If you recollect in 2015, we said that gas turbines built by Former Governor Peter Odili were sold to Sahara Energy, business partners of Chibuike Rotimi Amaechi at $319million.

“What was stashed at the Ikoyi residence was part of that fund.

“We have facts to prove that the said money belongs to the Rivers State Government. The Federal Government must return our money.”

Governor Wike accused the FG of peddling false stories about the money belonging to the National Intelligence Agency. He says they are false and shameless measures taken by the embattled APC Federal Government to save its name.
Wike said: “As I speak to you, the Federal Government is so embarrassed that this has happened. All the stories that the money belongs to the NIA are fake.”

The Rivers State Governor challenged the FG to set up a panel of Inquiry, which should publicly sit to investigate the source of the money, if it refuses to believe his claim.
Wike further added that the Rivers State Government needed funds to complete a lot of projects, maintaining that on no account would this criminal activity be covered up. He said as long as the FG continues with its disturbance against the progress of Rivers State, confusion will never ends in the Federal Government part.
He said: “We are giving them seven days to return our money. Otherwise, we would take legal action to recover our money. $43million will help us complete several projects. We need that money for projects.”