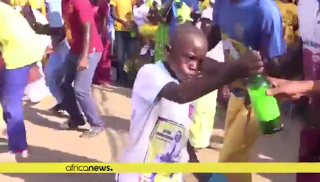 There is a church in Congo also known as Louzolo Amour, that uses beer to heal the sick, perform miracles and cast demons out of its followers.

The place of worship was founded by a man called Guy Emile Loufoua Cetikouabo, who called himself God, even claimed he is the real God and said to be invisible like God. 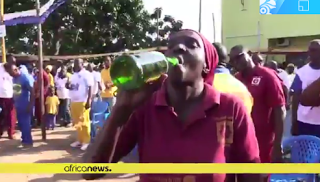 Though he’s no longer alive but his church members says he is represented on earth by Charles Mikoungui Loundou who is their current leader.

The church believes that beer can be used to cleanse and save souls from evil spirits. The church members descibes this mixture of beer and faith, “biéramicine”.

DRC Cuts Internet and SMS Access as the Citizens Awaits…

The church services lasts up to 9 hours and they are dedicated to the healing of souls and bodies, casting out evil spirits with sips of beer and praise. People are reported to have been coming from all walks of life majorly to get an immediate solution to their problems.

According to African News, the church has upto 5000 followers.

A curch member, Kondi Jean-Jacques said: “I arrived here sick, brother Mikoungui gave me a bottle of beer, I drank a first sip, and a second, at the third one, I went into a trance, I then felt better. I believe beer can heal, if you drink it with faith.”

Watch the video of their mode of worship below: