By Andre Falana On Apr 13, 2017
Share
Join Us On Telegram
The Joint Admissions and Matriculation Board (JAMB) is preparing for the 2017 Unified Tertiary Matriculation Examination (UTME) which is scheduled to hold in May. 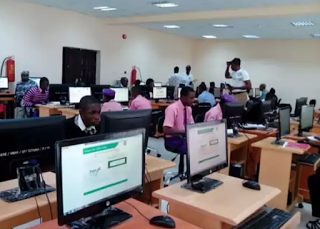 The registration process this year has been one of the most stressful for candidates who have not stopped complaining.
It took some candidates more than three days to do their registration while some others are still finding it hard to register.
Some Nigerians are worried about the preparedness of JAMB for this year’s UTME and this is why.
1. Poor network for registration

One of the complaints candidates have had about the new registration process introduced by JAMB is slow speed of internet services at CBT centers. Some have been stranded at registration centres as they were unable to generate their Personal Identification Number (PIN) due to poor network.
2. The mock examination failed to hold

The board had fixed April 8 for its inaugural mock exam but it was postponed last minute despite assurances that nothing would go wrong. Candidates arrived at their centres on the day of the test but it was postponed until further notice due to some “unforeseen circumstances. Could this be a sign of things to come?
Related Posts

3. Not enough equipment for computer based test

Some Nigerians are of the opinion that Nigeria has not developed enough in Information Communication Technology (ICT) to make CBT mandatory.
One of the candidates said: “Nigeria has not gotten enough equipment to make CBT mandatory. We have not gotten there yet. A lot needs to be put in place. If in the urban areas we are still complaining of no network, what then becomes of the villages?”

4. JAMB is yet to get it right

The board had failed to carry everyone along when it fixed mock test for April 8, knowing that some candidates had not been able to do their registration. Also, since CBT was introduced, it has been one challenge after the other.
“Since the introduction of CBT we are still faced with network failure, malfunctioning of computers and all that. Is this a sign that JAMB exam will experience hitches at the detriment of the students?” one of the candidates queried.
It was earlier reported that the JAMB registrar Prof Is-haq Oloyede revealed that about one million UTME candidates have registered for the 2017 UTME as at April 7, 2017.
Above all, candidates and their parents across Nigeria have raised an alarm over the stress of registering for the examination.
Via.
CandidatesJAMBNaij.comNewsOpinionProf. Ishaq Oloyede
Share