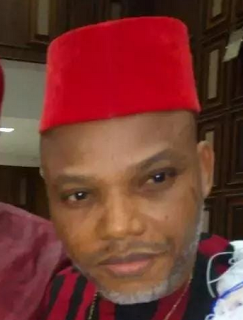 The incarcerated leader of the Indigenous People of Biafra,
IPOB, Nnamdi Kanu has finally been granted bail by the Federal High Court
sitting in Abuja, today.

The imprisoned leader of the Indigenous People of Biafra
(IPOD), Nnamdi Kanu has been granted bail by the Federal High Court sitting in
Abuja.
Nnamdi Kanu was actually granted bail based on health issue.
The pro-Biafra agitator leader is also expected to provide
three sureties one of who must be a senator, currently serving,  a Jewish religious head and highly esteemed
person and must have a land in anywhere in the FCT.
The bail bond is ₦100 million for each surety.
Kanu was also instructed never to grant any press conference
pendant on his trial’s outcome.
Related Posts

The IPOB leader will not be in a assembly of more than 10 people.
Justice Binta Nyako, who presided on the case, said the
pro-Biafra agitator’s bail will be withdrawn if any of the instructions are disobeyed.
The other accused people were however denied bail.
The judge said that on treasonable crime, the allegations
against them is a grave felony against the state.
Furthermore, the judge rejected Kanu’s application to vary
her earlier order on shielding witnesses in the matter.
Justice Nyako said the witnesses who have been recognised by
security agents cannot be visible in the course of the hearing.
The Judge also held that the witnesses would be identified with
alphabets during the court process.
Ayo FayoseBreakingCourtIPOBNewsNnamdi Kanu
Share