By Andre Falana On Apr 25, 2017
Share
Join Us On Telegram
The National Drug Law Enforcement Agency (NDLEA) has
declared a Lagos woman who is suspected to be drug baroness wanted in connection
with cocaine deal. 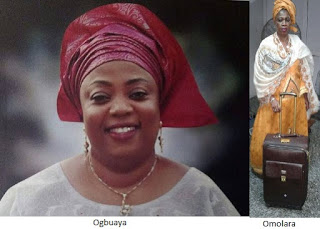 Fumilola Arike Ogbuaya, the suspect, who is also known as
Arike Fumilola Ogundipe, purportedly involved in trafficking about 1.595kg of
cocaine from the Murtala Muhammed International Airport to Saudi Arabia in
February, this year.
In a statement issued by the NDLEA spokesman, Mitchell
Ofoyeju, the agency is also probing Ogbuaya’s multibillion Naira assets, suspected
to be proceeds of drug trafficking.
According to the statement by the Lagos commander, NDLEA has
begun investigation into Ogbuaya following the arrest of one Odeyemi Omolara
Morayo, also recognised as Ariyo Monsurat Olabisi, for drug smugglling. The result
of investigation launched on Morayo’s case led to Ogbuaya’s revelation.
He stated that the NDLEA later invited the Lagos socialite
in for interrogation but all to no avail. NDLEA officers then launched a search
into her Lagos home, but the suspected drug trafficker was not available.
He said: “The agency
is therefore investigating several landed properties worth several billions of
naira traced to Mrs Fumilola Arike Ogbuaya a.k.a. Arike Fumilola Ogundipe in
Lagos, Ogun and Osun States.
“The assets include
Arike Plaza, some plots of land, and buildings in strategic locations. The
Lagos socialite, who is a distributor of alcoholic drinks, is needed by the
NDLEA in an ongoing investigation. She hails from Ilesa, Osun State.”
Happy with the stage which the investigation has reached on
the ongoing incident, the NDLEA Chief Executive, Muhammad Mustapha Abdallah has
sworn to follow the case to a reasonable end and to trace all illegal drug
proceeds.
The NDLEA Chief Executive said: “The agency is building capacity for elaborate investigation and
this is a test case of pressing beyond a drug mule to the financiers of drug
trafficking. We are determined to dislodge drug trafficking cartels and also
trace their ill-gotten wealth which must be forfeited to the federal
government.”
He asked members of the public with any linking information
to the location of Ogbuaya to call the attention of the closes NDLEA office to
them.
Abdullah said that asset forfeiture was a vital obligation
in the NDLEA Act and guaranteed that no stone would be left unturned in the fight
for the total breakdown of drug traffickers.
Recall that Odeyemi Omolara Morayo, (57), a grandmother and
textile dealer, at the popular Balogun market, was arrested in connection with
cocaine trafficking to Jeddah, Saudi Arabia at the Lagos Murtala Mohammed
International Airport.
Related Posts

Omolara, who prepared her for journey as if she was really going
on a pilgrimage to Jedda, Saudi Arabia, only to be caught with narcotic content
in her luggage.
According to the NDLEA commander at the Lagos airport,
Ahmadu Garba said that the two parcels of white powdery substance that were tested
positive for cocaine were carefully hidden inside her baggage.
He said: “a
female passenger, Odeyemi Omolara Morayo with a valid Egypt air ticket from
Lagos to Saudi Arabia had been arrested with 1.595kg of cocaine.

“The cocaine which was
concealed in a false bottom of her bag was discovered during routine check on
passengers at the departure hall.

“We had to cut the bag
open to recover the cocaine because of the way it was neatly concealed. She was
immediately arrested and the case is currently under investigation.”
The suspect Omolara in her statement, said that her friend
and also her customer was the one that lured her into drug trafficking.
Omolara who hails from Ogun State, said: “I am a textile merchant at Balogun
market, Lagos. I have two children and my daughter is married with children.
Recently, I told my friend that I loved to go on pilgrimage this year and she
promised to sponsor my trip.

“That was how she
collected my international passport, processed my travel documents and bought
return ticket on Egypt airline.

“The only favour she
requested from me was that I should take a bag to Saudi. She also told me that
somebody will collect the bag from me at Jeddah. It was an empty bag so I kept
my personal effects inside it.

“On getting to the
airport, officers discovered cocaine inside the bag during search and I was
arrested”
In his reaction, the Chairman/Chief Executive of the NDLEA,
Col Muhammad Mustapha Abdallah described the suspect’s action as condemnable.
The NDLEA Boss said: “Smuggling
cocaine to Saudi Arabia under any guise is condemnable. It is good that she was
arrested here because drug trafficking attracts capital punishment in Saudi.

“Apart from saving her
from execution in Saudi, the prompt arrest also protected our country from
disrepute.

“The Agency will not
relent in the fight against illicit drug production, trafficking and abuse.”
CrimeDrug TraffickingNDLEANewsWanted
Share

SENATOR’S DEATH: Pathologists says OVERDOSE of PAINKILLER was given to Senator Isiaka Adeleke