A popular network leakst Ice Universe, who often shares exclusive information about latest products in the mobile industry, has announced the imminent arrival of a new Samsung ISOCELL camera sensor with an amazing resolution.

The insider information claimed that this year, Samsung will release several innovative camera sensors for smartphones at once. And very soon the first smartphones will appear on the market, which will be equipped with 200-megapixel camera sensors. 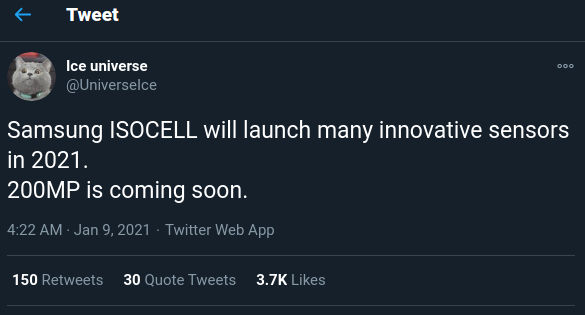 The current 108MP image sensors, which became especially popular last year, are referred to by many as 100MP, we can assume that the actual resolution of Samsung’s 200MP sensor will be 216MP.

Ice Universe has repeatedly proved that it has connections in various companies and has leaked information not only about the design of smartphones, but also about new camera sensors, including the aforementioned 108MP sensor, and other equipment.

Instagram Will Soon Let You Hide The Number of “Likes” or...

Samsung Announces The First 5G Modem In The World – Exynos...