In the beginning, Mediatek processors were universally seen as inferior in terms of performance to Snapdragon processors from Qualcomm. However, recently, that has been changing and a number of Mediatek processors have stood up to and beaten their Snapdragon counterparts. New AnTuTu benchmark scores reveal that MediaTekâ€™s new Helio G90T beats Qualcommâ€™s Snapdragon 710.

The Redmi Note 7 is powered by Qualcommâ€™s Snapdragon 660 chipset, but its successor will be equipped with a Mediatek chip, and it isnâ€™t a slough. The Redmi Note 8 Pro will have the new Helio G90T chipset beating in its chest. If you felt disappointment, donâ€™t. The G90T beats Snapdragon 710 cleanly at AnTuTu performance benchmark tests, as revealed by Xiaomi. Have a look!

That gap is huge: 283,333 to 214,739. And this isnâ€™t the first MediaTek processor to beat its Snapdragon counterpart. Mediatek has steadily built up momentum and isnâ€™t playing second fiddle across board anymore. Qualcomm has a real challenger on the block. 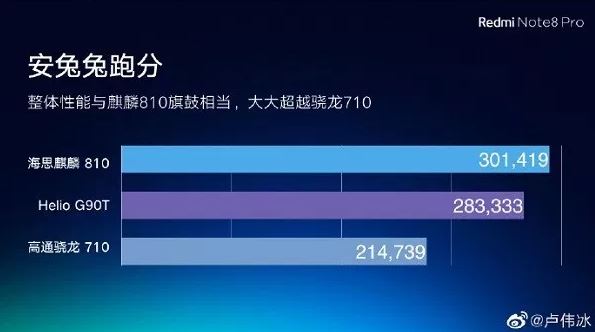 NOTE: The top processor in the above image with the 301,419 score is Huawei;â€™s Hisilicon Kirin 810 chipset. Fantastic lead it has there.