TellForce Blog
Home Google Google Maps receives a facelift Update with new Icons and Colour Scheme
Twitter
Pinterest
Linkedin
ReddIt
WhatsApp
Tumblr
Email
Print
Telegram
Advertisement
Google Maps has been available for years now and has become very important to most people, especially smartphone users. It’s very good for direction, locating a particular place and can be very useful for knowledge too. Getting to know a place without even stepping there. 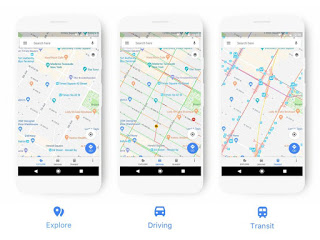 It’s one of those Google Services that we use rather frequently.

On Wednesday, Google announced that they are updating Google Maps with a new look. “Now, we’re updating Google Maps with a new look that better reflects your world, right now,” says Google Maps Product Manager, Liz Hunt, in the post.
The company has updated driving, navigation, transit and explore maps so that they will highlight the information that is most relevant to each experience. Also, they have updated their colour scheme and added new icons so that you can quickly identify what point of interest you are looking for.

Thus, for example different points of interest will have a designated colour and icon so that it makes it easy to find it on the map. Churches, museums or even hospitals will have different colours and icons which is great for you to quickly find them on the map. Google also revealed a sheet of the new colours and icons that will help you get acquainted with the new look.

These changes will be effected in the next few weeks in all Google products that incorporate Maps, which include Search, Earth, Android Auto and the Assistant. Google also said that the new changes will appear on apps, websites and experiences offered by companies that use Google Maps APIs as well.
Join Us On Telegram
ALSO READ:  WhatsApp Privacy Policy Updated: Agree To New Terms Or Loose Access
Advertisment

Fast Pair for Android appears to put a final end to...