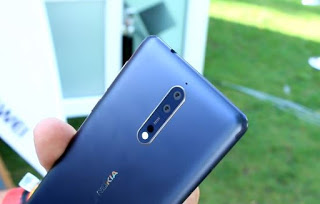 The Nokia 8 version with 6GB RAM and 128GB internal storage was
recently revealed via the US FCC’s document. And now, a latest report says, the
same model has now been officially confirmed by maker, HMD.
Related Posts

The report states that the Finnish company has confirmed the
6GB Nokia variant will be made available in Europe –specifically Germany – on
October 20. As far color option is concern, It’ll only be available in Polished
Blue.

According to the report, the device will carry a price tag
of €669, which is €90 higher than that of the regular 4GB/64GB version.
Talking about the availability in other region, no
information on when the device will reach other key markets around the world,
where the standard Nokia 8 isn’t available yet.
Source
Nokia 8
Share