By Andre Falana On Aug 31, 2017
Share
Join Us On Telegram
According to the Bell, Samsung Electronics’ next flagship
smartphone Galaxy S9 may likely be announced earlier, going against the company’s
traditional, possibly in January. 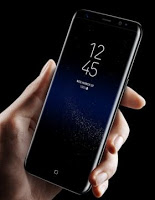 The report said Samsung Display’s OLED panel shipments will
start in November, two months in advance of the current S8 whose display shipments
started in January this year before the phone’s unveiling in March.
Display panels are usually shipped earlier than other parts
such as camera modules and cases. After the panel shipments, it takes about two
to three months for the phone’s entire assembly.
Related Posts

The S8 was unveiled on March 29, about three months after
the panel shipments. The global launch was April 21.
Based on the assembly schedule, the S9 is highly likely to
debut end-January before its global launch in mid-February.
The report said parts makers have already predicted the S9’s
advanced launch considering the panel development started in April last year,
three to four months earlier, under the project name “Star.”
The early phone launch is reportedly closely linked to
Samsung’s strategy to defend its flagship phone sales against Apple’s upcoming
iPhone 8 later this year.
Source
Galaxy S9
Share

Features of the SanDisk iXpand Base for Apple iPhone backup (video)