By Andre Falana On Aug 4, 2017
Share
Join Us On Telegram
Facebook Stories feature has been on the mobile app for a while now. Now, the feature is rolling out to Facebook’s desktop site. Here, the Stories feature will not be at the top of the page, as it is on the mobile app. Instead, it will be positioned at the light hand side of the screen, where it will be less obtrusive. 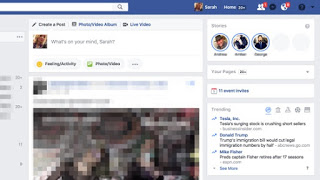 A small question mark icon appears in the Stories module, too, which explains the feature’s purpose when you hover over it with your cursor.
Facebook confirmed recently that the Stories launch on desktop is still considered a test. However, the social media giant noted that a wider rollout is expected soon.
As we all know, Facebook first launched Facebook Stories after seeing its success on Instagram, where it was launched in 2016. Within five months, Instagram Stories had gained 150 million daily users. Now, the feature has 250 million daily uses, compared to Snapchat’s 166 million.
Related Posts

Facebook has credited Snapchat with pioneering the visual communication format, but believes the pivot into Facebook Stories and Instagram Stories goes beyond copying a competitor’s popular app. Stories are simply a new way to share, according to the company. This has led to the format being widely adopted across the industry.
However, the fact is that the Facebook Stories feature has not gained as much traction as its competitor apps. In fact, so few people were using Facebook Stories that the company began to display grayed-out icons of your most frequently contacted friends instead of blank spaces in the Stories feature.
Right now, it is yet to be seen how bringing this feature to desktop will impact its usage significantly. There are only so many places users want to post this sort of ephemeral content, after all, and it appears that people have chosen Instagram and WhatsApp.
Meanwhile, Facebook has not confirmed what percentage of users will be getting Stories on the desktop, but it is not broadly available.
Source
facebook
Share