Smuggler arrested with 102 iPhones strapped to her body 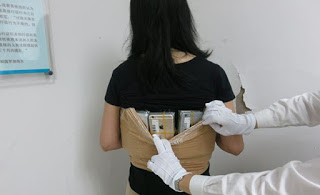 A woman has been apprehended while making an attempt to smuggle
102 iPhones from Hong Kong to mainland China. The report said, she strapped
them to her torso and tried hiding them with extra sheets of clothing.

The suspected smuggler tried crossing the border on June 30,
around 8:00 PM. According to the customs officers that apprehended her, the
weather was scorching, yet the woman was putting on a knitted sweater on top of
her t-shirt. Moreover, her arms and legs seen to be relatively slim, but her upper
body was strangely wide. This made customs officials to direct her the metal
detector, upon passing through the security system, the alarm triggered.
Related Posts 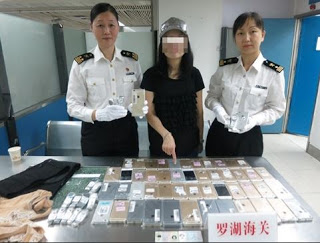 The woman was then searched, only to discovered nothing less
than 102 iPhones and 15 luxury Tissot watches strapped to her torso. The total
weight of all the rustled goods was 40 pounds.
The customs officers were astonished to have discovered so
many smartphones strapped to the woman’s body and said that this is the most
they’ve ever witnessed. The effort is even more striking, wondering how the
woman succeeded in adding a little extra with the Tissot watches.
This isn’t the first attempt to smuggle iPhones from Hong
Kong to mainland China. Reason is that Apple’s handsets are less expensive in
Hong Kong compared to the mainland China and a lot of money could easily be
made if they are not caught. Way back in January, a man was apprehended for
smuggling 94 of Apple’s devices, taped to his body in a similar manner. No
information on how many smugglers escapes every year.