By Andre Falana On Jun 30, 2017
Share
Join Us On Telegram
There has been an update on an upcoming Infinix smartphone.
This leak was gotten from GFX Benchmark site, the listing threw more light on what
we are expecting from Infinix Mobility. 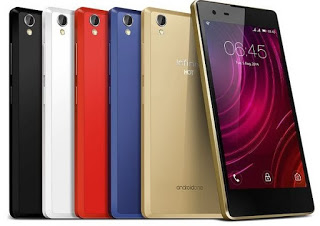 The listing tags the device as Infinix X603 which is
suspected to be the Infinix Note 4 or could even be Note 4 Pro which scheduled
to be launched nextweek. Recall that the code name for the Note 3 is X601.

According to the details from the GFX Benchmark, the X603
has a 6-inch display unit at 1920 x 1080 pixels resolution and runs Android 7
Nougat. It is powered by a MediaTek MT6757CD (Helio P25) octa-core processor with
clock speed at 2.3 GHz, a RAM of 6 GB and comes with a 64 GB internal storage. The
smartphone features a 12 megapixel rear camera and 5 megapixel front-facing
camera.
Checkout the screenshot below: 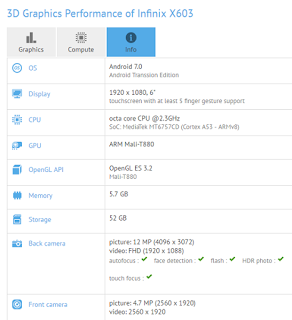 The interesting part of the information is that the GFXBench
listing stated the OS as “Android 7 Nougat Transsion Edition”. What could this
mean?
However the Transsion Group crops out smartphones with at
least three various skins of Android – XOS which is for Infinix smartphones, HiOS
for TECNO smartphones while iTel smartphones features a different skin but
lighter.
Launch Of The Infinix
X603
According to Infinix, the official launch of Infinix Note
should happen in few days to come and by that time, we will be able to confirm
the Note 4 specifications and price to you. What we do know is that the X603
must be one of the two – the ordinary version and the Pro version.
AndroidInfinixInfinix Note 4
Share