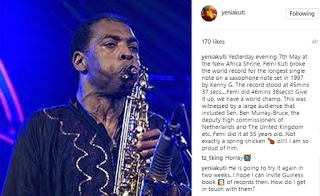 The 55-year-old musician registered this achievement at the New Africa Shrine on Sunday evening, May 7, 2017 after breaking the previous record set by Kenny G in 1997 at 45 minutes, 37 seconds.

Femi attained 46 minutes, 38 seconds in the presence of dignitaries, among which are Senator Ben Murray-Bruce, deputy high commissioners of United Kingdom and that of Netherlands, many others.

At 46 minutes and 38 seconds I’m sure Femi Kuti broke the world record pic.twitter.com/68d7cc2xMC

“Now that you are conniving with the police I don’t feel safe and I have to cry out!” – Mercy Aigbe

Here is a hat with a speaker; Atari launches the Speakerhat