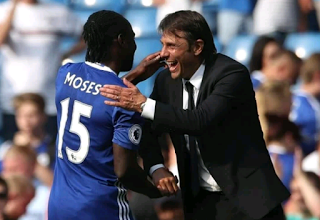 On Friday night, May 12, Chelsea recorded a 1-0 win over West Bromwich Albion to win the Premier League title with 2 games at hand.

Mathew Irondu who is a die-hard Chelsea fan, a Construction Engineer said that he named his boy who was born lastweek Thursday after Coach of the club, Antonio Conte and the Nigerian/Chelsea star, Victor Moses as his own of catching fun and celebrating the club’s success.

He said: “this win is most significant for me because it is the first by Chelsea since I switched my supporter ship to the club from Arsenal FC.

“I had endured years of EPL drought from Arsenal which made me switch to Chelsea and I celebrated it this way because I don’t have money to make merriment.

“this is my first child and I fervently pray that his birth, a day before Chelsea’s league win, will bring good tidings to my family, the club and their fans across the globe.”