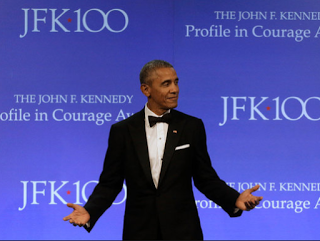 The immediate past President of the United States of America, Barack Obama appears to not leave the spotlight and seems to be even more popular than the current President, Donald Trump.
Related Posts

Last night, Obama was given an award for political courage from the family of John F. Kennedy, few days after House Republicans won passage of a bill dismantling much of Obama’s popular bill on health insurance. 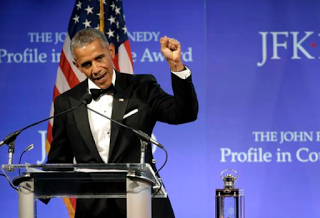 While giving his acceptance and appreciation speech, the ex-President challenged legislatures to put the gains of the less privilege ahead of party loyalty.

He said, “I hope that current members of Congress recall that it actually doesn’t take a lot of courage to aid those who are already powerful, already comfortable, already influential but it does require some courage to champion the vulnerable and the sick and the infirm.”

Obama was given the Profile in Courage Award at a dinner held in the John F. Kennedy Presidential Library and Museum. The award which is given annually is named for a 1957 Pulitzer Prize-winning book by Kennedy that profiled eight United States senators, who risked their careers by taking principled though unpopular positions.
AwardBarack ObamaforeignUnited States
Share

Photo: See what President Buhari wrote about his trip to london

“Now that you are conniving with the police I don’t feel safe and I have to cry out!” – Mercy Aigbe