North Korea trys to launch a new missile but fails

North Korea has been reportedly attempted to fire a missile it introduced just few hours ago during a military parade, however the launch was a terrible embarrassment as it was a failure following the failure of the weapon to launch and blew up amost at instant. 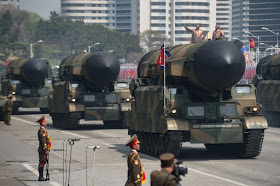 The South Korean defence ministry said it had detected a failed launch from Sinpo – where North Korea’s biggest submarine base is located.
According to a military official the weapon is ‘presumed to be a new ICBM’ as it is longer than the existing KN-08 or KN-14 missiles. 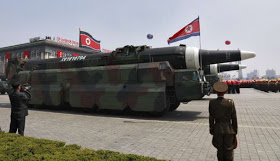 North Korea launched this missile for the first time earlier this month, firing it from a land base near Sinpo, home to a known North Korean submarine base. The missile did not appear to go very far, but still, analysts described the development as “scary” because of the solid-fuel component.

The information of the failed missile launch didn’t come from North Korean Govt, it came from the South Korean defence ministry which released a statement.

“North Korea attempted to test an unidentified type of missile from Sinpo area in the South Hamkyong Province this morning, but we suspect the launch has failed.”

North Korea has launched 5 missile launches that are mobile ICBMs that can reach as far as the United States and yesterday’s failed launch would have been the 6th one.

Meninigitis war: Emir Sanusi should not ridicle his own heritage – Governor Yari