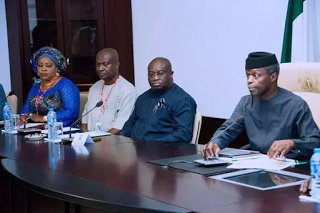 The Vice-President, Professor Yemi Osinbajo is presently in
Abia state in the eastern part of Nigeria where he just been crowned a
chieftaincy title as the “Enyioha 1”
from traditional rulers.

Osinbajo was in the state in his continuous effort to guarantee
peace in the restless Niger Delta region and other oil-producing states of
Nigeria.
Related Posts

According to NAIJ.com, Professor Osinbajo met with the
stakeholders on the communities.
Osinbajo went from Kaduna state where he met with the governor,
Nasir El-Rufai, earlier this morning of Friday, March 24, 2017 to Owerri, the Imo
state capital, before roving to Abia, according to Akande.

“VP Osinbajo (is) now
in Abia state continuing FG’S interactive engagements with oil-producing
communities. He went through Kaduna-Owerri to Abia

“VP (is) accompanied
by three ministers: Trade and Industry, Niger Delta and Petroleum Resources
(state).”
The entourage was said to have been received by the governor
of Abia state, Okezie Ikpeazu.
Abiachieftaincy titleEnyioha 1Nasir El-RufaiNewsYemi Osinbajo
Share