Samsung was flying high when the Galaxy S7 which officially outsold the iPhone 6S and 6S Plus, and even more so when the Galaxy Note 7 camealong and awestruck everyone, unfortunately became a weapon of mass destruction.

Itâ€™s therefore likely to be happy to leave 2016 behind and turn its attention to this yearâ€™s flagship, which we know as the Galaxy S8.

Samsungâ€™s mobile communications vice president, Lee Jae-yong, claimed the Galaxy S8 will â€œfeature slick design and an improved camera, as well as an enhanced artificial intelligence service.â€Â  There has been a lot rumours surround the phone but a special feature to come is the ability to turn your phone to a desktop brain.

According to the latest speculation, the Galaxy S8 will feature something that has never existed on an iPhone or on many other Android devices.

The report claim that Galaxy S8 will be capable of running in a sort of â€œdesktop mode,â€ Microsoftâ€™s Windows

This news is further mentions a new DeX dock that will turn the phone into the brains for a computer. That dock will enable users to connect a mouse, keyboard, and other peripherals to the phone. SERIOUS!

It was first heard that the Galaxy S8 could bring a continuum-like desktop experience through a report from Windows blog (All about Windows Phone), but now guess it becoming real for Samsung fans. 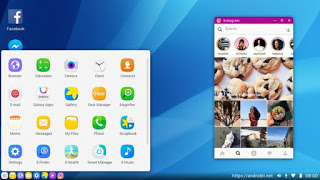 Although no image yet but a concept image was created by Androbit using information from other leaks, and itâ€™s thought to be pretty nice.

It appears more like the device functioning in a similar way with that of Microsoftâ€™s Continuum, which simply allows by plugging your phone into an external monitor and use it as a computer. It should be able to run all of the Android apps that users have on their phone.

Airtel to exit Africa within a year