In a webinar hosted by TECNO Mobile, Samsung has confirmed that it is working on its first ISOCELL camera sensor with an RGBW color model. The sensor has been named the ISOCELL GWB and will be going with a 64MP resolution. This is now quashing earlier rumors about it having a resolution of 50MP.

The ISOCELL GWB was presented by the Vice President and Head of R&D at Samsung Electronics China (via SamMobile) who called it “the most human eye-like image sensor.” This has been made possible through the RGBW color filter pattern in which a new white pixel improves the sensor’s light sensitivity for better low light photos while also boosting color accuracy.

Samsung has developed the ISOCELL GWB in partnership with Chinese smartphone company TECNO Mobile, which makes it likely that the sensor will end up on a TECNO smartphone as early as next year. It will not remain exclusive to TECNO though, and other brands should also be able to benefit from it.

That said, a 64MP RGBW sensor is not the only one Samsung is working on currently. Rumor has it that a 50MP RGBW solution is also set to arrive next year after the GWB goes live. 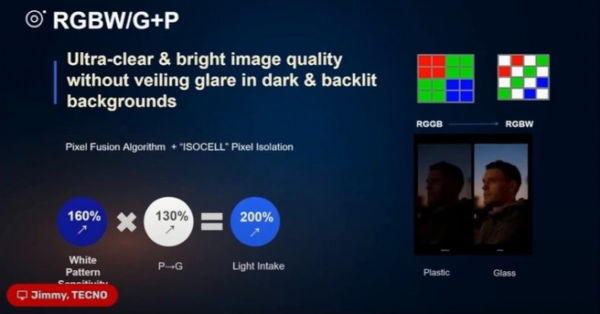 As for the release date, the ISOCELL GWB doesn’t really fit the leaked camera specifications of the Galaxy S22 series – the S22 Ultra is expected to come with a 108MP primary snapper while the standard S22 and S22+ models will reportedly be using 50MP sensors. Therefore, our 64MP champ will likely not be making its debut at Galaxy Unpacked in February.