The brand’s entry into the EV Sedan segment is a bid to create a better market positioning for the brand as well as gain a larger share in the EV market which is dominated by Tesla Inc.

The Ioniq 6’s 77.4-kilowatt-hour battery allows it to drive up to 610 kilometers (379 miles) on a single charge, compared to 429 kilometers for the Hyundai Ioniq 5.

In terms of design aesthetics, the EV gives you a resemblance to the Porsche Carrera 911S Turbo from the back. The new EV employs a streamlined design concept officially known as “Electrified Streamliner” in terms of exterior design. The front sports a coupe-style C-pillar design, an electronic rearview mirror with a camera, and a closed front design. 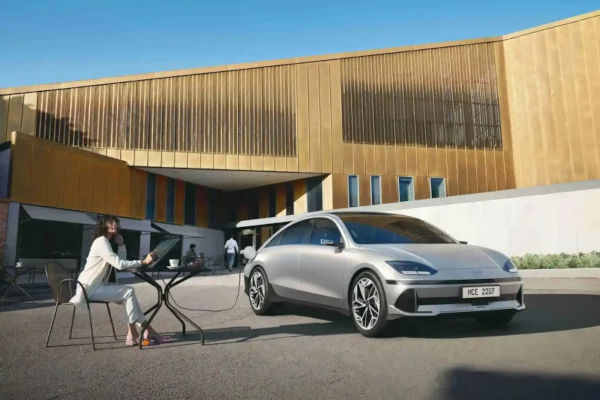 In terms of power, the Hyundai Ioniq 6 is expected to come in single-motor rear-wheel drive and dual-motor four-wheel drive configurations. The most powerful model has approximately 300 horsepower, a pure electric range of up to 610 kilometers, and energy consumption of approximately 14 kWh/100 kilometers.

Production will begin this year in the third quarter. Sales in the United States will begin in early 2023, with a larger rollout to follow.

Hyundai is to invest 95.5 trillion won ($73 billion) on electrification this decade, launching at least 17 new models between now and 2030 and aiming for annual sales of 1.87 million EVs by the end of the decade. The company aims for a 7% share of the global EV market by 2030 and an 11% share in the US. The Ioniq 6 arrives around seven and a half months after Hyundai Motor Group subsidiary Kia introduced its latest Niro electric SUV.

According to BloombergNEF data, Hyundai and Kia sold approximately 123,000 battery-powered and plug-in hybrid EVs in the first half of this year, putting them third on the world’s top EV-maker list behind Tesla and BYD Co. The region of Europe, the Middle East, and Africa accounted for approximately 60% of their sales, while Kia has become the second-most popular EV brand in the United States this year.