Lenovo owned Motorola has finally unwrappedÂ the Moto Z4 â€“ the successor to last yearâ€™sÂ MotoÂ Z3, and much like last yearâ€™s device, the Z4 supports Moto Mods which magnetically attach to the back of the phone for some extra features ; like extra battery life, wireless charging, or even the capability to capture 360-degree photos.

The Moto Z4 doesnâ€™t deviate much from the Z3 in terms of design, with similar and familair body size and style, and that is perhaps so that it can take up some existing Moto Mods, though there are still some bits of variations. 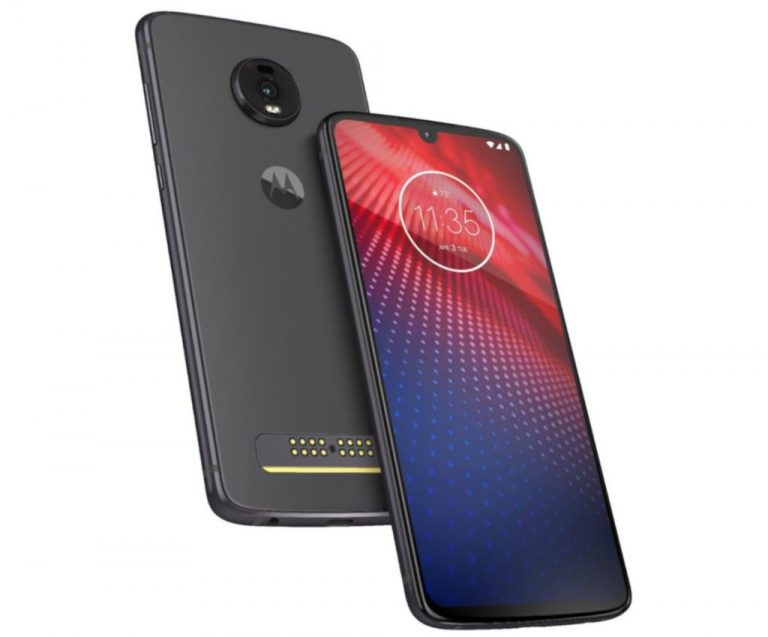 the phone is a glass sandwich with POGO pins on the back for snapping on the Mods. Motorola has followed recent phone trends by excising the bezels on the front in favor of a teardrop notch and a 19:9 OLED panel

Both the front and back utilize Gorilla Glass 3, and on the rear,Â  there is a large camera bump as well as the POGO pins for clicking in compatible Moto mods.

There is a slight difference in design from last yearâ€™s Z3, and that is the fact that the Z4 has no visible rear fingerprint sensor. That feature has been relocated on under the display, and as you would notice, Motorola has finally embraced the trend by ditching the front bezel for a teardrop notch and a 19:9 OLED panel.

At 158 x 75 x 7.35mm, the Moto Z4 is now relatively thicker than its predecessor, all thanks to a larger 3600mAhÂ  battery with 15w turbo charging which it claims can take you for two days off a single charge. The 3.5mm jack makes a return, and the device isnâ€™t water resistant, but does comes with P2i splash-proof nano-coating.

The Moto Z4 flaunts a 6.4-inch OLED display with Full-HD+ resolution and a teardrop notch at the top, as well as an in-display fingerprint scanner, and under its hood is an octa-core Qualcomm Snapdragon 675 SoC, coupled with 4GB of RAM.Â  And speaking of the cameras, the Z4 drops the dual setup on the Z3 for a single 48-megapixel rear camera with Quad Pixel technology to capture 12 MP images, OIS, artificial intelligence (AI) features and a 25-megapixel front camera with 1.8Âµm Quad Pixel mode for 6.25MP images, portrait mode and AI-based beautification.

The device boots Android 9 out of the box, and is compatible with all Moto mods, including Motorolaâ€™s 5G Moto Mod that enables the Z4 to work with Verizonâ€™s 5G network(sold seperately), while it is bundled with Moto 360 Camera mod.

The Z4 is exclusive to the U.S at the moment, where it is currently available for pre-order from Best Buy, B&H Photo, and on Amazon.com (with Alexa Hands-Free).Â  It comes in Flash Grey and Frost White colors, and is priced at $499.99. No officialÂ  words regarding availability outside of the States.