Samsung Galaxy A5 (2018) spotted with Exynos 7885 chipset on Geekbench 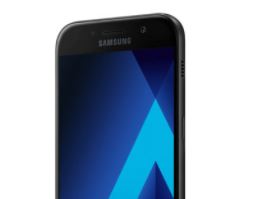 The Galaxy A series hardly comes with an options of chipsets
unlike the series. However that tradition might change in 2018. The Galaxy A5
(2018) has been spotted on Geekbench with an Exynos 7885 processor. Interesting,
isn’t it?

Furthermore, the Geekbench previously revealed an SM-A5300
with a Snapdragon 660 chipset, but the results are from the SM-A530F. The
Qualcomm processor shared a similar single-core performance but had a lead in
the multi-core test. 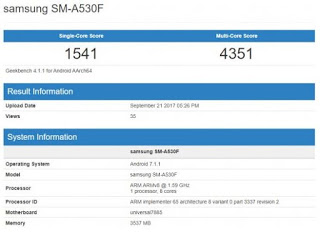 Next year model should possess more RAM as well, 4GB or 6GB which
depend on the model availability. It is expected to run Android 7.1 Nougat out
of the box at launch early next year (may be February).
Looking properly at the naming of the models, the
international version (F) of the Samsung Galaxy A5 (2018) will land with an
Exynos chip while the Chinese variant (0) will make use of Snapdragon and will come
with a 6GB RAM.