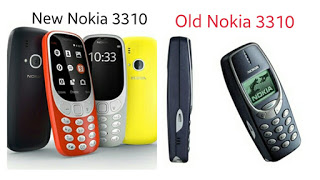 I recall when my Pop bought the old legendary Nokia 3310 for my Mom as a birthday gift way back in 2001. She immediately found herself on another planet while we children smiled sheepishly but joyful and happy for her. No one dare move close to the phone, except you want receive the scold of your life (Real Caring and Loving African Mother). We hold it like egg then, little did we know that the phone was not different from a rock.
It’s no longer news that the old rugged legendary Nokia 3310 has reincarnated in 2017. Of course, the modern version can never be like the stone-like old version. The new version of Nokia 3310 is now available in Nigeria.
Not only did classic Nokia 3310 possesses a near indestructibility feature but it also has a near everlasting battery life. Also recall the game that makes the phone cool for kids then and even some adults, the “snake game”.
Related Posts

However, the original Nokia company does not make phones again but the name lives on, all thanks to the a Finnish company called HMD Global, which was given the rights to produce Nokia phones.
According to the General Manager of HMD Global, West, East and Central Africa, Joseph Umunakwe, Nokia is happy to bring back the legendary Nokia 3310 to Nigeria.

He said:“We are delighted to bring the Nokia 3310 phone to our consumers in Nigeria. Nokia has been one of the most iconic and recognisable phone brands in our country for decades. HMD has received an incredible reception from our partners so far; it seems everyone shares our excitement for this next chapter.”

“Our consumers are more discerning and demanding than ever before and for us they will always come first. We’ve worked really hard with our teams around the world to bring together world class manufacturers, operating systems and technology partners, enabling us to proudly start sales of our the Nokia 3310, a classic reimagined .”

Some features of the New Nokia 3310 includes:
The above standby and talk time means the new version still carries the trait of the legendary battery life.
Nokia 3310
Share