By Andre Falana On Jun 8, 2017
Share
Join Us On Telegram
The 4th Generation network services continues to spread like epidemic with better strength. 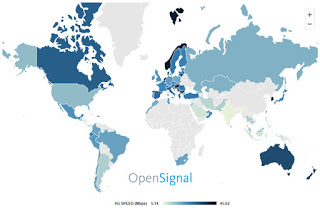 In the biannual report released by the Wireless coverage mapping company, OpenSignal titled, “The State of LTE”, some interesting trends were highlighted based on the global 4G coverage.
4G Network coverages continues to get wider
According to OpenSignal report, the availabilty of the LTE services, accessibilty of the 4G signal to subscribers globally and improvement on previous services were tracked accross the countries.
In Some Eastern-Asia countries, 4G signals have spread round just like their 2G and 3G signals and subscribers ability to access it generates an excellent result.
The best keep getting better in terms of speed
The report also mentioned that the best performers in terms of speed maintains their positions in rankings as the continue to improve on thier speed. About 15 countries have reportedly delivers download speed of 30 Mbps. However, globally, LTE speed continue to decline as more countries introduces lower capacity networks online.
South Korea rules again
South Korea keeps dominating in the LTE services as it scored the highest in availabilty. The first runner up after the OpenSignal test was Hungary, followed by the Netherlands, then Norway and Singapore. They all recorded exceptionally result in both categories.
Related Posts

India makes big wave in LTE availability
India proved they can be among the topshots as they have moved up the LTE availability rankings. It gives a rare scenerio in which a single telecom operator can have an serious impact on a mobile marketing within a short period.
In September 2016, Jio launched its 4G services which attracted about 100 million LTE subscribers, by implication shooting up the accessibilty of 4G services within the country but at the expense of lower average speeds.
4G Availability
The chart below shows how consistently accessible LTE networks are in each country. Instead of measuring the geographic coverage, OpenSignal’s availability metric tracks the proportion of time users have access to a particular network. 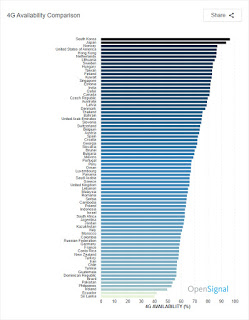 4G Speed
This chart simple illustrates the average download connection speed that users in each country get when accessing the LTE networks. Although, HSPA or other technology were referred to as 4G by some telecom operators, OpenSignal only made use of the LTE connections during the 4G speed tests. 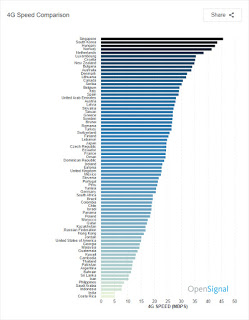 Fastness of a country’s LTE speed depends on many factors:
♧How much spectrum is devoted to the LTE network,
♧Adoption of new 4G technologies like 4.5G (LTE Advanced),
♧Rate of network congestion.
Overall, from the test, those with the fastest speeds tend to be the countries with LTE-Advanced networks with larger proportion of LTE-Advanced capable devices.
4G Technology
Share