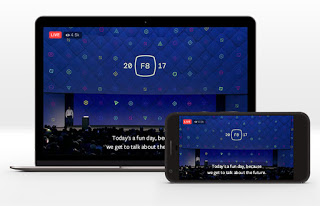 You are live on Facebook and you wish it could be somewhat like HollyWood movie with subtitle. Closed captions has been introduced to Facebook Live by helping those with hearing impairment to enjoy Lives videos on Facebook.
Since the introduction of Facebook Live, daily watch time for its broadcast has increased by more than four times and that one out every five videos on Facebook is a Live Broadcast, according to the tech company.

Facebook says, “More video is being shared and watched on Facebook than ever before, and Live video has become one of the most engaging forms of content on Facebook. Over the past year, daily watch time for Facebook Live broadcasts has grown by more than 4x, and 1 in 5 Facebook videos is a Live broadcast.”

From this moment, if the caption setting is turned on, closed captions would automatically been seen on your Live video where applicable, all thanks to Facebook’s speech recognition technology.
Related Posts

Before now, adding of captions to non-Live videos has been available incase you don’t know, provided the video is being uploaded to a page.
You can try it now and educate us more by dropping your comment below.
Source. Facebook
facebookLive Broadcast
Share