By Andre Falana On May 4, 2017
Share
Join Us On Telegram
The two Controversial Pastors who should be in a team
fighting spiritual warfare together appears to be in different factions, shooting verbal
bullets at each other.
Related Posts 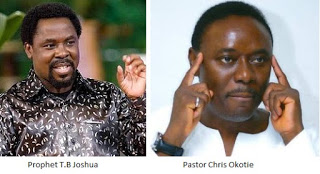 The Founder and General Overseer of the Household of God
Church, Pastor Chris Okotie, has sparked some word on the news about his colleague,
Prophet T.B Joshua, planning to move to Israel.

Recall that T.B Joshua had during a church service on April
29, announced his plans to relocate to Israel because of the persecution he’s
facing in the country.
It would be recall that about 2 years ago, more than 100
people, mostly South Africans were reportedly killed following the collapsed of
part of his church structure.
Based on the tragedy, Joshua was sued to court by the Lagos
state government and the said case is still in process.
Following his announcement of relocation, Alhaji Lai
Mohammed, the current Minister of Information and Culture, begged the
controversial prophet to abolish his ideas to relocate, claimed such move would
have a negative effect on the economy.
Upon the reaction of the Minister of Information and
Culture, Pastor Chris Okotie described the T. B Joshua, who is the Founder of SCOAN,
as an Impostor.
His statement reads thus:

“Joshua is an
impostor. He is controlled by a malevolent misanthropic spirit. His hypocritical
jeremiad should be ignored. He is just another frustrated shaman seeking public
sympathy.” 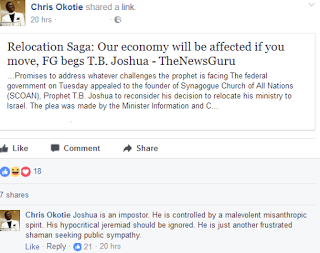