By Andre Falana On May 4, 2017
Share
Join Us On Telegram
A social media user, Sani Mannir has took to his Facebook
page to asked Senator Hadi Sirika, who is the current Minister of State for
Aviation to provide a source of drinkable water for his people in Sirika
Village, Katsina State.

“I have been
flying the Katsina to Daura roads in the last 45 years but I have never known
where Sirika is till last two weeks when my car broke down on my way to Daura.
“The car stopped at a
village between Shargalle and Kayawa along Katsina /Daura roads. While waiting
for a mechanic to come, I decided to know the name of the place.

So I asked a passer-by
and he told me this is Sirika. I couldn’t believe my eyes because I expected to
see a very big and organized village. I went further to ask the if he knows Min
Hadi Sirika he said yes and even showed me a mud house belonging to an elder
brother of the Minister who is the village head. I asked again for the
Minister’s house and the person told he doesn’t have a house in Sirika. His
house is at Shargalle, which happens to be a larger village.

“It was then that a
bare footed boy pushing a wheel barrow containing jerry Cans of water came our
way. I asked the boy where he fetched the water from? He mentioned a place
which I can not remember but said it is about 3-4 km away.

“It was then that I
decided to do this post in order to call on the Minister to come to the aid of
his people by sinking a bore hole for them. Mr Minister please give your people
life by giving them water. Let them know that their son is a Minster.” 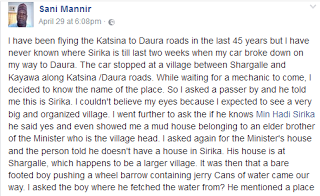