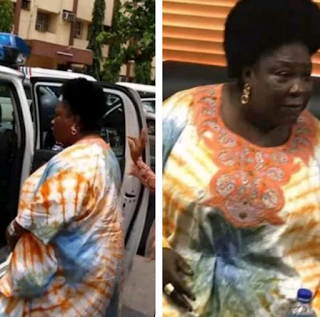 The woman who was rescued on March 24, 2017, from committing suicide by jumping into the wide mouth of Lagos Lagoon from the Third Mainland Bridge by the Nigerian Police Force, has been charged to court and granted N500,000 bail.

On monday, April 24, 2017, a Lagos magistrate court in Ebute-Meta ordered Mrs. Taiwo Titilayo Momoh who is textile merchant, to undergo psychiatric examination after her arraignment by the authority for attempted suicide.
The 58-year-old woman was however granted N500,000 bail with two sureties in like sum. On March 24, Momoh was prevented from taking her life by jumping off the Third Mainland Bridge into the Lagoon by operatives of the Rapid Response Squad, RRS of the Lagos State Police Command.
Momoh claimed that she was actually pushed to end her life by the accumulated debts hanging on her neck, says that will end her sleeplessness and shame.
The textile merchant who is a member of RCCG and also resident in Lekki, Lagos, revealed that she had made several attempts to see her Parish Pastor in order to share with her burden with him and for the church to assist her raising the fund, but all to no avail.
CourtJudiciaryLagoonLagosNewsSuicideTaiwo Titilayo Momoh
Share