By Andre Falana On Nov 28, 2017
Share
Join Us On Telegram
YouTube has transformed the way its autofill feature works following
some reports that says that some combinations of words suggested some
paedophilic phrases. 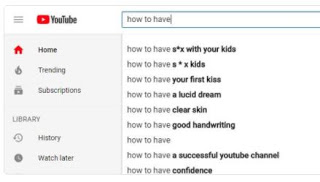 Over the last weekend some persons reported that typing
“how to have” would be completed with a number of variations on
“s*x with your kids”. Other searches fashioned out responses that
also used the asterisked “s*x” word.

Some folks even speculated that an attempt to troll YouTube
results was accountable for making the phrases appear.
Predatory comments
According to a YouTube spokesperson,

“Earlier today our teams were alerted to this profoundly
disturbing autocomplete result and we worked to quickly remove it as soon as we
were made aware.”

She continued, “We
are investigating this matter to determine what was behind the appearance of
this autocompletion.”

YouTube is yet clarify why the phrase “how to have s*x
with your kids” suddenly became one of the widely suggested phrases.
Tony Stower, a policy and public affairs manager from the
NSPCC, said YouTube ought to have done better.

“Social networks
used by millions of children should never suggest dangerous or illegal
content,” he said. “It is not good enough for problems like this to
go unaddressed until media coverage brings it to the attention of sites like
YouTube.” 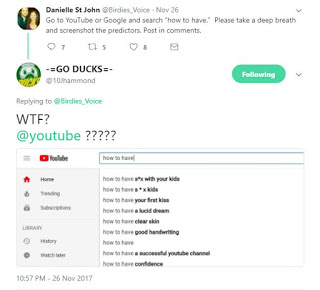 Mr Stower said an amendment to a forthcoming UK bill
covering data protection could mean all social networks have to put in place
systems that try to keep people safe.
He said the NSPCC was urging politicians to back the bill
when it comes up for a vote.
Charlie Warzel, writing on Buzzfeed, suggested that the use
of the asterisk replacing the “e” in the word “sex” across
lots of different searches suggested deliberate action was behind it.

“The results are
very specific and could be the result of a co-ordinated campaign to game the
algorithm,” he said.

This could have been an attempt to populate YouTube with
search results that embarrass the site, he said.
None of the videos that the “how to have” results
linked to showed abuse of children.
The disturbing results came after a week in which YouTube
was widely criticised for not doing enough to stop sexual predators targeting
young users of the site.
Big brands in the likes of Mars, Lidl and Adidas have decided to pulled out their adverts
from YouTube after investigations by the BBC and The Times found tens of
thousands of predatory accounts being used to leave explicit comments on
children’s videos.
Share