By Andre Falana On Nov 12, 2017
Share
Join Us On Telegram
Related Posts

Dual SIM phones are now common as the air we breathe. They
can now be found all over the place and across all socio-economic classes. If
you have ever wondered where dual SIM phones are used the most, in this article
you get the list of the top dual SIM phone markets in the world in Q2 2017. 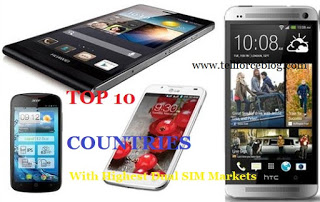 In 2012, dual SIM smartphones were fast gaining grounds and
there were already mid-range mobile phones with dual SIM functionality back
then. We also published a feature article on that rise of dual SIM phones.

Fast forward five years to 2017 and no-one blinks about dual
SIm phones any more. They have become a normal phenomenon all over the world.
Why Going Around With
A Dual SIM phone?

A dual SIM phone gives the user the flexibility to eat their
cake and have it – enjoy favourable tariffs and benefits across two competing
mobile networks. The benefits can include cost, quality of service, coverage,
and more.
The first mobile phone to include dual SIM functionality was
the Benefon Twin, in 2000 and hailed as “innovative” (source).
But it wasn’t until the mid to late 2000s that they began to
gain grounds after small and often nameless Chines manufacturers began to push
them hard. Then new and unknown smartphone makers like TECNO were some of the
earliest adopters. Major Smartphone brands snubbed dual SIM phones till market
demand forced them to shift position. The rest, as they say, is history.

We have drawn up a table of the top 10 dual SIM phone
countries in the world in mid-2017. The information is courtesy of DeviceAtlas
who use share of mobile web traffic to draw up their statistics.
Countries, Dual SIM
Phone Market Share

Of course, mobile web traffic alone isn’t adequate to cover
all scenarios. For example, there are millions of Nigerians and Indians with
basic dual SIM mobile phones that have no internet capability. There are many
with internet-ready dual SIM phones but who are not connected. So, the above
table is not likely to represent the most accurate figures. But they are not
misleading. The figures are a fair representation of the top dual SIM phone
countries in the world.

Dual SIM phones are more prevalent in certain countries –
emerging markets – than in more developed markets. The reasons for dual SIM
adoption have been given earlier.
Personally, I use a dual SIM smartphone because of mobile
data. Living in Nigeria means that one often has to switch mobile internet
providers depending on location, dependability, and tariffs. My voice/SMS line
is constant, but I require that second SIM slot in order to have flexibility
for data.
Dual SIM
Share

Finally, We Are Going To Get iPhone With Dual-SIM Support

Finally, We Are Going To Get iPhone With Dual-SIM Support