By Andre Falana On Nov 21, 2017
Share
Join Us On Telegram
Android Message – Google’s default SMS application – has
received a major update and is available for all users. This new Android
Messages app version is 2.7, a jump from version 2.5. Though there are no
significant update in the interface, there was reduction in the size of the APK
size as well as integration of two new features into the app.

The first feature, talked about in the past, is Duo
calling integration. Duo is the Google’s owned OS default video calling
app, and positioning a video calling icon right in the SMS conversation window
is an interesting and good approach in making more users to access the free
service. 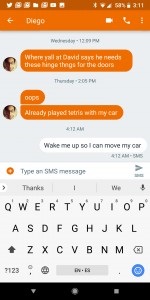 Another new change in the Android messages app is a process
of sending or requesting payments from friends and family. The latest
integrated service is provided by Google Wallet, which was among the first NFC
payment services in the US before Google phased it into Android Pay. Google
Wallet also had its own debit card, but it has also been phased out.
Related Posts

According to an APK teardown by Android Police, the app is
also getting ready to streamline the notification indicator. Rather than
displaying “New messages below” in the SMS conversation, it would say “X new
message(s)” where X is the number of new messages below. 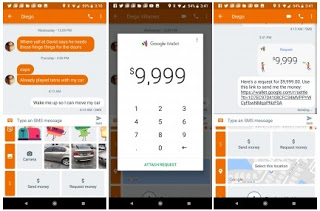