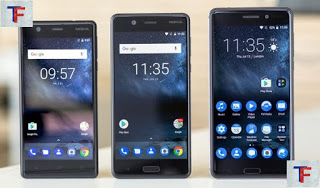 The same same model that never allows the media to rest –
the TA-1004 got FCC certification and disclosed on Antutu following its visit
to GeekBench both in 4GB and 8GB sleek levels. Well, a mysterious vendor named states
only 4GB of RAM will be obtainable, at the initial stage, and the internal storage
will be 64GB.
A lot people have called it 8, some says it’s 9, nonetheless
according to this latest intel, the long overdue new-Nokia flagship will be dubbed
Nokia 8 and it’s apparently coming on July 31. The info originated from an unknown
Scandinavian retailer that also reveals the price, which is €589.
ALSO READ: Nokia 6 specs review
Related Posts

The Nokia smartphone will be spotted in four colors at the
launch stage – blue, steel, gold/blue and gold/copper, however the marketing
team may come up with different ideas in the naming of those.
Every leaks available confirmed the use of the Snapdragon
835 for chipset (used by most high-end SoC this year), a 5.3-inch QHD display,
and a dual 13MP rear shooter. Some suggestions and signs tends to attribute all
these specs to a supposed real-life Nokia 8 unit, though a veiled one, yet it
went by 9 at the time.
In just over 2 weeks’ time, July 31, we will find out the
truth. So stay tuned.