By Andre Falana On Jun 1, 2017
Share
Join Us On Telegram
It appears Nokia and Microsoft are in the habit good designs from the public. How can you design a device and refuse to release it to the world. Are they always scared of failure. Well, it could also be non-profitable to them. But they should stop leaking “had I know” photos of devices that did not make it. 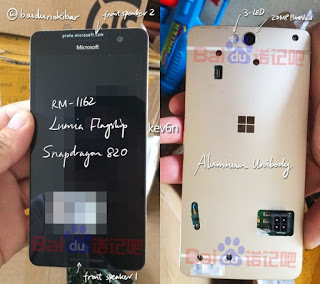 The talking point is the Lumia 960 was never revealed, it also known as Lumia “Northstar.” The leaked photos were actually from China. The photo of the smartphone is supposedly to be a prototype unit that Microsoft is still using for development of Windows 10 Mobile.
Related Posts

It is still unknown may be Microsoft will still be released to the market as Lumia 960, but this should be one of the company’s Windows Phone flagships.
The Lumia 960 design looks like Lumia 950, which was the last high-end Windows Phone device launched by Microsoft. From the pictures above, the smartphone is equipped with Qualcomm’s Snapdragon 820 processor and would have ware an aluminum body.
It also came with 20 MP PureView camera with a three-LED flash. It had a Quad HD display as well.
Source
Lumia
Share

Latest Skype update makes it more social than ever before