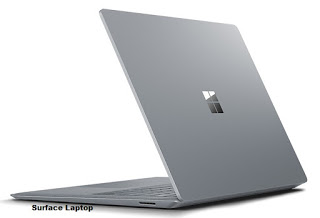 Microsoft has launched a laptop to compete with Appls’s
MacBooks and Google’s Chromebook called Surface
Laptop. It is the first in this class.
This launch follows the successful launch of Surface Book
and Surface Pro. The Surface Laptop was targeted at students or related set of
people. Microsoft claimed that the laptop would take a student throughout the
school days till the day of graduation and still retain the same level of
performance throughout.
The Surface Laptop is lighter than 13-inch MacBook Pro, but weightier
than the 12-inch MacBook.
The laptop has
a 2,256×1,504 resolution display, with the similar 3:2 aspect ratio as that of
Surface pro. It is a touchscreen device and also supports Pen.
However, the most remarkable feature of the device is the
interior surface. It is clothed with a synthetic fabric material called
Alcantara, made of polyester and polyurethane. This material was produced back in
the seventies, and it has been used in card and boats. The reported stated that
the fabric material appears lovely and pretty easy to clean, according to
reports.
The device is powered by the seventh-generation Core i5
processor, good enough for academic and professional jobs. However, if you are
a gamer, you will have to stay away as it has only Intel’s basic integrated
graphics.
Related Posts

Additionally, the new laptop runs Microsoft’s Windows 10 S
operating system, that is, you are allowed to only install software from the
official Windows app store. So anyone wishes install apps from any external source,
one would need to upgrade to Windows 10 Pro.
Below are some of the specification for the Surface laptop:
Source.
Surface Book 2
Share