By Andre Falana On May 4, 2017
Share
Join Us On Telegram
The current marital crisis between the Nollywood Actress
Mercy Aigbe and her estranged husband, Larry Gentry appears to over flood the
bridge they were trying to build after releasing video defending themselves
also claiming the family was united as ever before. 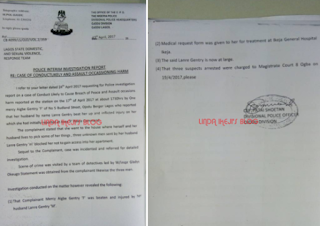 According LIB report, in a video and document obtained from
the police by online media outreach, Lanre Gentry also known as Larry Gentry
has been allegedly indicted, thus being declared wanted by the authority
following the arrest of the three suspects.
Related Posts

I still want to build a home with Lanry Gentry – Mercy…

The arrest was confirmed in an exclusive copy of the Police
Report which was signed by the Divisional Police Officer of Ojudu Command, CSP
Fatai Shoetan.

The reports states that; “the said Lanre Gentry is now at large and three suspects arrested were
charged to Magistrate court 8 Ogba”