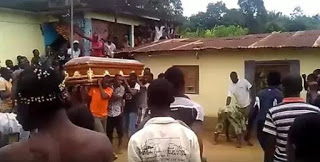 A video shared by a Zambian man identified as Hagra Tembo on Facebook alleged a this shocking experience where a corpse refused to be buried until it took villagers to the home of its killer.

According to Tembo caption, he wrote via his Facebook page:

In the video, it would be observed that the villagers appears to all shocked when the corpse seems to be in control of the undertakers’ movement and directed them toward a house which turned out to be its killer’s house.

The bizzare incidence is said to have happened in a Zambian village.

How To Use OneCard Recharge Card To Subscribe for StarTimes