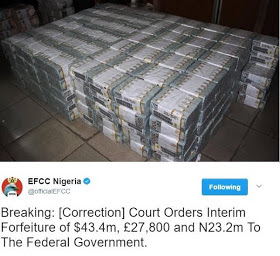 The Lagos Federal High Court has approved a temporary forfeited of the $38million, N23million and £27,000, recovered by the operatives Economic and Financial Crimes Commission (EFCC) in a home located at Osborne Towers, Ikoyi, Lagos to the Nigerian government.
In a court hearing presided by Justice Muslim Hassan today, April 13, 2017, he directed that the money should be handed over to the Federal Government pending when the owner surfaces to claim his or her  possession.
The case was also adjourned til May 5, 2017.
Join Us On Telegram
ALSO READ:  "It’s only the living that can rule Nigeria and not the dead" - Prophet Iginla to Buhari
Advertisment

BlackBerry set to license out its secured OS version of Android