Twitter has finally lifted the 140-character limit for every
of its user to 280. The social networking platform which can be seen as a micro-blogging
platform initially tested the new limit on a select group of Twitter handlers, mostly users with huge
volume of followers and celebs.

The trial period which started around ending of September took
over six weeks, through which Twitter used to gather some interesting data.

According
to Twitter, only 5% of tweets sent stretched more than 140 characters while
just 2% exceeded 190 characters. However, this data was gathered together
before the changing of the limit for the almost every Twitter handlers.
But truth be told, most people tends to ignore lengthy
posts, by implication the shorter it I the sweet and attractive to read.
Twitter’s main reason behind the increase in character
limits is to attract more users who wish to have more space to express
themselves more easily and at once. 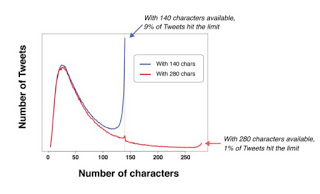 Meanwhile. The new change will not affect some languages
such as Japanese, Korean, and Chinese because these languages has much denser
characters in their languages, so there’s no need for them to cram very much.

Well, those whose limits have been upturned will see a new
circular character limit indicator, which replaces the digital counter.
twitter
Share