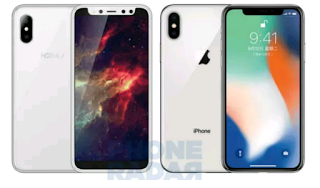 iPhones are known to always have a photocopy which might not even be a thousand meter close to them in terms of specs. We keep on seeing different cloned iPhone year in year out and 2017 is not an exception. Though it runs the latest Android software: Android 8 Oreo but its never an iPhone. Say hi to the Hotwav Symbol S3. We have info on it, thanks to PhoneRadar.
About the cloned iPhone X
Though iPhone X is yet to start rolling out but we already have cloned one. Though Symbol S3 attempted to hide the top and bottom bezels which is not as clever or as successful as that of iPhone X. Many “bezel-less” smartphones actually have those top and bottom bezels. Yes; they hide them cleverly.
Related Posts

The display is a large 6-inch IPS job with 1440 x 720 pixels resolution and 18:9 aspect ratio. The S3 has two dual cameras – one on the front and the other at the back. The selfie dual camera is a 16 MP + 2 MP combination, while the rear has a 13 MP + 2 MP combination. The rear camera looks like that of the iPhone X too.
How powerful is our clone? It is powered by a quad-core Mediatek MT6739 processor coupled with 2 GB of RAM. Internal storage is 16 GB. As mentioned earlier, it runs Androi 8 Oreo. Android OS is free, after all. Easy peasy. So, steal the iPhone X’s physical design and pour into the shell a serving of Android Oreo.
It may look like the Apple iPhone X on the outside, both front and back, but the Hotwave Symbol S3 is not even close at all. It’s a very cheap and soulless copy.
Source
Hotwav Symbol S3
Share