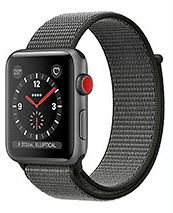 On September 12 this year, Apple’s announcement was a great
success by all accounts. The major happening at the event was the announcement
of the iPhone 8, the iPhone X, a new Apple Watch and a WatchOS update.
However, we are talking of WatchOS 4.0. It features a lot of
upgrades, which include an updated and much more intuitive Heart Rate app, a
proactive Siri watch face, and an autoset function for pool training. The new
Apple Watch Series 3 which is powered by the latest WatchOS 4 completely
overtook all previous versions in all aspect. Below are some of the best of
these features:
Design And Processor
Related Posts

The new Apple Series 3 features a new, faster dual-core
processor. This allows for 70 percent faster performance and quicker loading
graphics.
Built-In Cellular
This is one of the most important new Apple Watch Series 3
features. Before, you had to connect your watch to your phone through Bluetooth
before you could use the cellular function. This new feature eliminates the
need for that.
Enhanced Wi-Fi
Apple added a series of hardware updates to boost
connectivity.  Now, there’s a really slim
electronic-SIM card. There’s also a W2 chip, to improve Bluetooth and wireless
connectivity, which increases Wi-Fi speeds by 85 percent.

Streaming Music
With the cellular addition, the latest Apple Watch can now
function with Apple Music. This allows users to stream music directly from
their Apple Watch.
Biometric Altimeter
Neither previous version of the Apple Watch could track
elevation. To do this, you would have to connect your watch with your iPhone.
Now, the Apple Watch Series 3 features a barometric altimeter, which tracks and
records elevation metrics during workouts.
According to the company, the new Apple Watch will be coming
to a Town Square near you real son. Apple will be offering the fully loaded
Apple Watch 3 for $399, and a version without cellular connectivity for $329.
Meanwhile, you can preorder the Apple Watch 3 now, and the new phones will be
available on September 22.
Apple Watch Edition Series 3Apple Watch S3Apple Watch Sport Series 3watchOS 4.0
Share