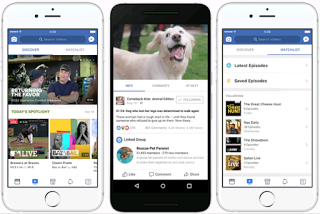 As with YouTube, there will be some shows produced professionally by corporate partners—including one live MLB game per week—but the company says the focus will be on videos uploaded by Facebook users. Now, here is why I think that Facebook Watch is more of a Twitter competitor than a YouTube competitor and why it won’t pose a serious threat to YouTube anytime soon.
According to the report, Facebook has a new home for original video content produced exclusively for it by partners, who will earn 55 percent of ad break revenue while Facebook keeps 45 percent. The “Watch” tab and several dozen original shows will start rolling out to a small group of U.S. users tomorrow on mobile, desktop and Facebook’s TV apps. 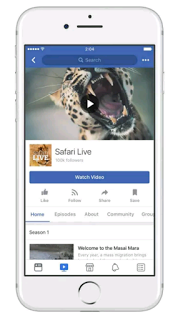 By hosting original programming, Facebook could boost ad revenue and give people a reason to frequently return to the News Feed for content they can’t get anywhere else.
Watch features personalized recommendations of live and recorded shows to watch, plus categories like “Most Talked About,” “What’s Making People Laugh” and “Shows Your Friends Are Watching.” Publishers can also share their shows to the News Feed to help people discover them. A Watchlist feature lets you subscribe to updates on new episodes of your favorite shows. Fans can connect with each other and creators through a new feature that links shows to Groups.
Related Posts

Facebook says it plans to roll out access to Watch to more users and more content creators soon, starting with the rest of the U.S. before expanding internationally. Users with access will see a TV-shaped Watch button in the bottom navigation bar of Facebook’s main app that opens the new video hub.
Facebook admits that “we’ve also funded some shows” as examples, but notes that these are only a small percentage of all the available shows. “We want any publisher/creator who is interested to be able to create a show in the future,” a Facebook spokesperson tells me.
“So there will be hundreds of shows at launch, and we’ll hopefully scale to thousands.”

Business Insider reported some leaked details about the redesign earlier today, but pegged the launch of original programming as starting August 28th, when the shows actually will begin to roll out tomorrow.
What is the first platform you think of when you want to watch a skit? Obviously it’s Instagram.
However, what is the first platform that comes to mind when you want to watch a music video? Or a tech review? Or a Vlog? Can you see where am I going to with this?
It will be very difficult for Facebook Watch to change the existing behavioral pattern. Difficult, but not impossible. So it should be fun to watch Facebook try to replicate what it did with Snapchat on YouTube.
facebook
Share