BlackBerry set to license out its secured OS version of Android

By Andre Falana On Aug 25, 2017
Share
Join Us On Telegram
BlackBerry has in recent time converts from a company that manufacture
and vends smartphones that runs on its own operating system to a corporation
that licenses its brand to smartphone makers who want to use its name for business.
It further develops what the company claimed to be a more secure version of
Android than the vanilla OS that comes from Google. 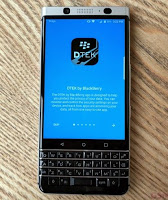 But, affiliating with companies such as TCL, Optiemus, and
BB Merah Putih for smartphone making was just the first stage of BlackBerry’s
licensing policy as it turns out. Phase two will contain licensing out its
security-focused version of Android to firms that are keen to sell
non-BlackBerry branded phones that run “BlackBerry Secure” – its OS
that emanate from the company’s modification of stock Android.

BlackBerry announced that it’s already on bench, working on
“a number of different contracts” concerning such licensing, some of
those due to be announced soon. The information comes from Alex Thurber,
BlackBerry Senior Vice President and General Manager for Mobility Solutions.
Any device powered by BlackBerry Secure will be indistinguishable, software-wise,
from a BlackBerry branded phone.
BlackBerry wants to eventually provide its Android
interpretation to companies in other fields too – medical devices and TVs, for
example. This is because more and more things are starting to run Android, and
all connected things can be hacked and used for cyber-attacks. So the company
feels its security expertise could come in handy, at some point at least.

How to change the YouTube seek time on Android and iOS