By Andre Falana On May 2, 2017
Share
Join Us On Telegram
The Emir of Kano, Muhammadu Sanusi II, has shared his payslip for the month of April 2017 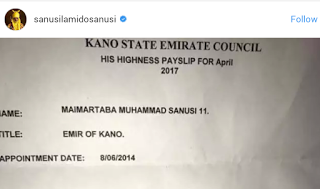 Sanusi, who is currently under investigation by anti-graft agencies on suspicion of misappropriation of funds and embezzlement posted details of his April 2017 salary on social media.
He shared this vital information via his own Instagram page earlier on Tuesday, May 2, 2017.
The caption that followed the pay slip was:

“Pay slip it is..1,246,875.00 net, against the alleged 12 million monthly by some online publications. “Although during colonial times, the Emir of Kano was the highest paid public office holder in Nigeria.”

However, there are speculations that some Northern leaders are pushing for the removal of the Emir of Kano, Muhammadu Sanusi II, following his take on reforming the mentallity of the Northerners in some aspects of living.
The rumour follows a probe by anti-graft agencies into the Emir’s account confirm whether the monarch misappropriated funds as accused by some sets of people.
Recalls that an anti-corruption unit in Kano State led by Muhyi Magaji revealed that investigation into the monarch’s account was ongoing.
Magaji noted the treasurer and secretary of the state-funded royal court have been invited for questioning, as part of the probe, on Tuesday, May 2,2017.
According to a source with a good knowledge of the ongoing investigation, claimed the investigation was targeted at how about N6 billion ($19 million, 17 million euros) from the palace funds was spent for chartered flights, luxury cars, phone and internet bills as well as other personal expenses.
In reaction to the allegations of embezzlement, the emirate council has however denied the accusation leveled against his royal highness.
corruptionEmir of KanoEmir SanusiNewsPay Slip
Share